A genealogy blog about the migration generation of my McKee Family line, including bios, transcribed obituaries, photographs, and research notes.

Add Us to iGoogle

Funeral services for Mrs. Edna Monia, 80, who died Monday in Jacksonville, will be held in Conger-Morris chapel at 1 p.m. Thursday. The Rev. William Piper of the First Christion church will officiate. Committal will be in Brownsboro cemetery.

The details that get included in an obituary vary based on the time, location, and newspaper. They can also vary based on who provides the information. Here are the vitals on Edna and her family.

I'll write more about this family...there's lots to write about...they are an interesting ranching family with deep roots in Jackson County, Oregon.

Every family tree has its black sheep and its stars. Earl Renwick McMillan is a family star. Here are the vitals:

Earl and Anna had two children: Edward and Margaret.

As you'll see from Earl's obituary, this family spent the majority of their lives in the Seattle area.

So why is Earl a star? I'll give you a hint before you read his obituary. Earl is personally responsible for countless hours of summer time family fun around a barbecue. Ready for his obituary?

Memorial services for Earl R. McMillan, 89, former mining engineer, will be at 2 p.m. next Wednesday at the Bellewood Presbyterian church in Bellevue. He died Dec. 1 in Sacramento, where he has lived the past several years.

McMillan was the manager of coal operations and the chief mining engineer for Northern Pacific Railroad from 1946 to 1962, when he retired. Prior to that, he worked for the firm’s subsidiary, the Northwestern Improvement Co., managing coalmining operations in Roslyn and Cle Elum from 1930 to 1945.

He was part owner of the Northwest Briquetting Co., which made briquettes out of coal, a method he invented. He also served as a mining consultant and was assistant superintendent for the Bureau of Mines here.

McMillan, a 1917 civil engineering and geology graduate of the University of Missouri, received honorary mention on the All American football team and was captain of the school’s championship baseball team.

He also received an advanced mining degree from the University of Washington in 1919.

He was past president of the West Coast Minerals Association, past chairmen of the North Pacific section of the American Institute of Mining Engineers and an elder of the Laurelhurst and Bellewood Presbyterian churches.

He was also a member of Seattle Rotary, the Arctic club and was a Mason. He served in the Army during World War I.

Remembrances are suggested to the Seattle Rotary Foundation or to Bellewood Presbyterian Church.

So the next time you pull out a hibachi and fire up the coals, be sure to hoist a beer in tribute to Earl.

Notice that there's no burial spot for Earl mentioned in his obituary. His wife's obituary also contains no burial location. Therefore, there are no Find A Grave memorials...yet. So I guess I'll be sending for death certificates (if I can) to see if they include burial information. I've already written to Earl's son and he indicated that the family has no interest in this project.

On another front, if you've never looked for patents or scholarly papers, you should. You might be surprised to find an inventor or two in your family. In Earl's case, his name appears on many patents based on his work and his published scholarly papers are cited. You can do a general Google search and many of these types of items will be included in the returns. However, you should also check Google's dedicated searches. On the Google home page, click the More link, and then click Even more. A list of dedicated searches sorted into groups displays. 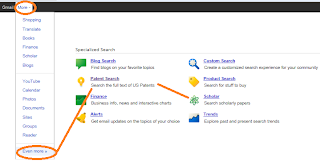 I had occassion to point out the patent search during a presentation. The next time I went to a meeting a lady walked up to me and told me that a relative of her's had a dozen patents. She wouldn't have looked had I not mentioned the patent search in passing.

Based on my experience, it's always worth a quick check while I'm watching TV.
Posted by Pam at 9:44 PM No comments:

While I've been hacking and coughing...

I've had the worse cold this week, including a burning chest and eyes. As a result, I haven't gotten squat done. The one interesting thing that has happened is an email exchange with a Booth descendant. She emailed me at an old AOL account that I've kept because I still have people find that address and contact me.

I've sent Alicia a gedcom so she can cross check and explain the error of my ways to me. When working with the Booth's, I'm using documents only. While that usuallly works, wierd stuff can happen. For example, a Booth contacted me about a Find A Grave location. Turns out that I was right about the original burial location...I had all the documents...except that afterward, the family had the body moved. You can't beat firsthand knowledge. Needless to say, I fixed the Find A Grave memorial.

After spending an absolutely wonderful day at a genealogy conference (John Philip Colletta, PhD...adore the man's mind), I find myself being hounded via email by what can only be described as a FAG bully. She has one family member that married into my family (a second marriage with no children yet!) and she's sending me "corrections" for problems that I've resolved long ago.

Don't get me wrong. I love FAG. But every once in a while you encounter some driven individual who seems not to understand that when you write you adopt a tone. This woman is sending me emails that all but scream, "Do what I tell you NOW!"

I decided to visit her profile. Low and behold...it's filled with tone too. I haven't lost my temper yet; however, I'm just about to ask her who at FAG appointed her hall monitor.

So wish me luck (and self-control!) in dealing with this unwelcomed intrusion into an otherwise lovely day.